AFA Action provides a fairly comprehensive guide to the issues and positions of each candidate HERE although incumbent Rep. Palazzo didn’t respond to the survey.

Each candidates positions can be researched at their campaign websites listed below:

Tuesday, March 8th is Mississippi’s opportunity to choose who they want representing them in the November General Election. Both Republicans and Democrats hold their primaries on the same day and, since Mississippi is an “open” state, anyone can vote for either party.

While both the Democrat and Republican parties have had many contenders drop from their respective primary races, many will still be listed on the ballots.  For the Democrats, the ballot will have the following:

The Republicans have reduced the number actively campaigning to four but the list of names on the Mississippi ballot also remains lengthy:

In addition to the widely publicized Presidential Primaries, South Mississippi will also be selecting their choice to represent the respective parties for the U.S. House of Representatives 4th Congressional District.  Incumbent Rep. Steven Palazzo is running unopposed for the Republican ticket while Democrat Mark Gladney is running unopposed to challenge Palazzo in November.

To see a sample of your ballot and find your polling place, visit the Secretary of State’s Polling Place Locator.

While the special election to fill the 1st Congressional District is still taking shape, U.S. Rep. Steven Palazzo has been appointed to replace the late Alan Nunnelee on the House Appropriations Committee (HAC).

Former Sen. Trent Lott said that Mississippi has been represented on the Appropriations committee since the 1930s and that losing that position would have been a big loss to the Gulf Coast and the state. “I was just depressed that we’d lost that slot,” Lott said. “So with Palazzo going on, that’s really important — important for the district but also important for him. For those federal installations we have down there on the Coast this is really big.”

Since this powerful committee writes the bills that determine where and how tax dollars are spent, the state benefits from the representation. Senator Thad Cochran chairs the Senate Appropriations Committee where he has established a strong history of bringing federal dollars into the state. Since Mississippi is dependent upon federal aid and routinely topping the list of state budgets supported with federal dollars (42.9% of the 2013 budget was provided by the federal government), having representation on the Appropriations committees of both the House and Senate is vital.

Rep. Palazzo should benefit politically because this position greatly expands his influence beyond that of his roles on the Armed Services, Homeland Security, and Space and Technology Committees, some of which he’ll have to relinquish. With Tea Party favorite and state Sen. Chris McDaniel expressing interest in the 4th Congressional District seat, Palazzo’s new-found status should provide give him an edge in future elections.

In the Clarion-Ledger report “McDaniel ‘would prefer federal position’” by Geoff Pender, Sen. Chris McDaniel hinted at a possible 2016 run for the 4th Congressional District seat currently held by Rep. Steven Palazzo. In the interview, McDaniel indicated that he will seek re-election for the District 42 state Senate seat that he currently fills. Officially, McDaniel has only stated that he will not run for Governor.

In lieu of an official announcement, some indications have pointed to a possible run for Mississippi Lieutenant Governor. McDaniel has openly objected to Lt. Gen. Tate Reeves’ control over the state Senate as stripping control from the people.

As a Tea Party favorite, McDaniel garnered national attention during the 2014 election campaign in which he pushed Sen. Thad Cochran to a run-off in the Republican Primary.

The qualifying deadline for the 2015 state election is February 27th but few candidates have candidates have entered. Some of the significant questions surround the statewide offices:

A wildcard in the 2015 elections is Sen. Chris McDaniel. He is thought to be a credible Republican challenger for Attorney General but has also indicated his interest in Lieutenant Governor and Secretary of State. However, McDaniel may be more set on federal office and wait to challenge U.S. Rep. Steven Palazzo for the 4th Congressional District in 2016.

The 2015 Election will be November 3rd with any party primaries 3 month prior on August 4th.

Mississippians voted overwhelmingly to support a state constitutional amendment to preserve the right to hunt and fish.  Nearly 90% of voters approved House Concurrent Resolution 30 (HCR 30) which will amend the state constitution and become the 18th state with hunting and fishing protected as a constitutional right.

Winners in the 2014 General Election:

*As of November 7th, D. Neil Harris, Sr. led the election against Paula Yancey by 18 votes with 18 affidavit ballots outstanding.

Two races will require a run-off.  In the Harrison County race for Circuit Court Judge (District 02, Place 2), Chris Schmidt earned 42% of the vote and will face Robert Fant Walker who received the second highest vote total with 34%.  In Jackson County, Mike Ezell garnered 43.9% of the vote and will face Scott McIlrath who came in second with 15.9%.

Runoff election will be November 25th.

Tuesday, November 4th is the mid-term general election.  The Mississippi Secretary of State has established a website that provides both the polling location and the ballot for every address.  Visit “www.sos.ms.gov/Pollingplace/Pages/default.aspx” to see where to vote and what exactly is on your ballot.

Mississippi Gulf Coast counties will be voting for the following:

This proposed constitutional amendment establishes hunting, fishing, and the harvesting of wildlife, including by the use of traditional methods, as a constitutional right subject only to such regulations and restrictions that promote wildlife conservation and management as the Legislature may prescribe by general law.

A variety of Chancery Court, Circuit Court, and County judges are also on the ballot but vary widely by location. Visit the Secretary of State website to see the specific candidates for your location.

Jackson County is voting for Sheriff with the following candidates on the ballot:

Prepare now for the 2014 General Election.  As a mid-term election, voter turn-out is generally lower meaning every vote is even more important.

The following are the candidates for the various offices affecting Mississippi’s Gulf Coast.  All links are to the candidates’ campaign websites, if available.  Additional information on each candidate can be found by searching The Blessings of Liberty.

Several judicial positions are up for election this cycle as well.  Below are the listings for the coastal counties with Circuit Court judgeships on the ballot:

Below are the candidates for the coastal counties’ Chancery Courts:

Jackson County is holding a special election for a new sheriff to replace Mike Byrd who resigned in 2013; more information if available here.  Three Mississippi Court of Appeals judgeships are also up for election but none that represent the coastal counties (District 5). 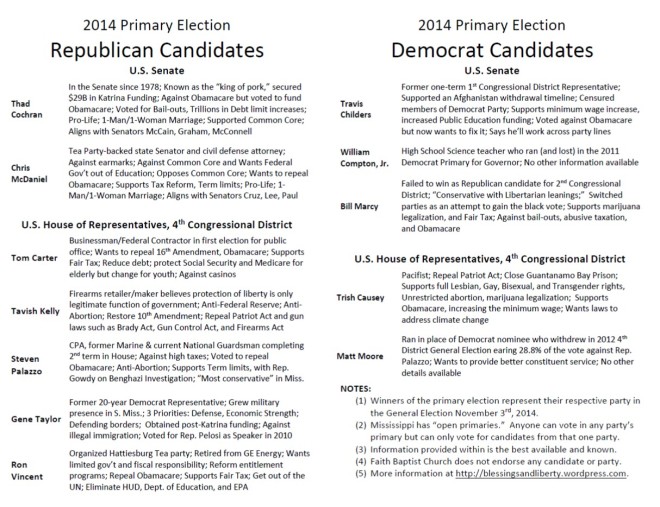 The information was collected primarily from the candidates’ own websites, voting records, and news articles that have been linked to throughout The Blessings of Liberty.

Faith Baptist Church does not endorse any candidate.

With the Mississippi Primary Elections one week away, candidates will be extra busy getting their messages out.  The race for the state’s 4th Congressional District has been overshadowed by the negative and heated race for U.S. Senate.  However, the two favorites, Steven Palazzo and Gene Taylor, appear to be in a close race as well.

Taylor continues to bash Palazzo for his support of Biggert-Waters Act (which reformed flood insurance), voting against Hurricane Sandy Relief, while blaming him for recent defense cuts and a failure to hold town hall meetings.  Taylor emphasizes that he has always had traditional Mississippi values and that his party change only reflects that the Democrat Party left him, not the other way around.

Palazzo has been running on his record that earned him recognition as the most conservative member of the U.S. Congress from Mississippi.  Meanwhile, he has been busy painting Taylor as a liberal Democrat who supported Rep. Nancy Pelosi (D-CA), voted countless times for trillions in spending and the liberal agenda, and switched parties only because Democrats are not electable in the state.

The Sun Herald reports that the candidacies of Tom Carter, Ron Vincent, and Tavish Kelly may draw enough conservative votes away from Palazzo to force a run-off.  Although he says he hasn’t done any polling, Taylor is predicting the same.  Outsiders Carter, Vincent, and Kelly continue to say that neither Palazzo nor Taylor will do enough to cut spending and shrink the national debt.  At least Taylor has admitted as much saying that “Mississippi needs those federal dollars.”

In what likely amounts to an inconsequential race, Democrats Matt Moore and Trish Causey have been pushing their agendas of LGBT and women’s rights, equal pay.

Search the Blessings of Liberty